Bikes and Snow, A Smart Combination?

Edited to add: not sure why this never posted, but I figure now is better than never!  I hope you had a wonderful Thanksgiving!

Wow, look at me posting three days in a row?!  I must be on vacation or something!  Well right indeed, today I got out for a much needed Thanksgiving break.  I must say, anxiety levels were a bit high amongst some of my friends this morning, as we awoke to some pretty heavy (but oh so beautiful) snow!  We accumulated I’d say 3 or so inches, enough for only some minor plowing, but also enough to cause the roads (and uh sidewalks) to be slick.  I still am using my bicycle to get around campus, and I noticed pretty quickly that the combination of (packed) snow, some ice underneath, and hybrid bike tires that are covered in snow isn’t such a great combination. 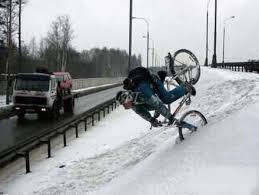 Spoiler alert: I looked almost as cool as this guy.

Now, a smart person, upon skidding numerous times/almost fishtailing on a bike if such a thing were possible, would hop off the bike and walk it the rest of the way.  Being a slightly less smart (or as I would like to say more adventurous) person, I decided to stay on the bike, but slow down and avoid sharp turns.  Well, it seems like my bike had plans of its own.  On my way back from biochem, I’d just crossed the street and was making a WIDE turn onto the sidewalk when I just went down.  Backpack, sneakers tied to the backpack, bike and all.  Boom.   All I could do was start laughing.  There was one kid leaving the building right in front of me who saw the whole thing unfold – I must say it was a pretty amazing wipeout.  I’ll give him credit, he was like are you okay? and I just laughed it off and thanked him and of course hopped back on my bike to continue on my merry (snow-covered) way. I skidded a few more times (and I was taking it nice and straight and slow), and by the time I made it back was seriously thinking some chain links on the tires would help…okay maybe not so serious but I can’t say it didn’t cross my mind :)

Thankfully, the roads were in MUCH better conditions and the drive back was uneventful.  Actually, I had a friend with me who turns out was visiting her grandparents in my (small) hometown, so we chatted the entire time and the trip flew by (because of her company, not my speed!)  Now I’m on to visiting with family, friends, and neighbors, eating a home-cooked meal, making granola and other staples to bring back to school, and sitting by the fire doing homework/writing this post.  Oh, and celebrating with a friend who just accepted a job offer starting about a month after graduation!! So proud.

Any fun stories about slip sliding in the snow?

I’m also the reason they put the orange fence up to keep people from skiing into the chairlift…been there done that :)

Are you off to visit family this weekend? Any good Thanksgiving traditions?

I’m going to try and get a family Turkey Trot up and running (pun intended)…we’ll see how that goes!